Spindizzy has had an annual Christmas Tree since its founding in 1998.  The tree appears in the Rose Garden, the social and geographic heart of the MUCK, generally sometime after National Horizontal Day, although the exact date can vary from year to year.  It persists through Christmas, and generally into the first part of January. 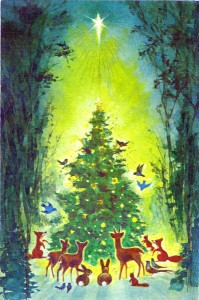 The tree itself traditionally starts life as a Charlie Brown-style tree, small and spindly, with its base wrapped in a blue blanket.  The basic design of the tree is widely believed to reflect Austin’s love of “A Charlie Brown Christmas”, which featured a similar tree.  Like the tree in the Christmas special, it grows in grandeur and size as people show it “a little love” by decorating it.  Everyone is encouraged to add a decoration of their own to the tree, by using the command ‘trim’, and describing what they’ve added.  In this way the tree becomes a community treasure, the varied decorations with their meanings both public and private serving to remind us of the years that were when we visit the trees in their retirement park.

The retirement ceremonies back then were much simpler, and often consisted of a group of people carefully moving the tree from the Rose Garden to its new home at N4 E0.  However, this all changed for the retirement of the 2004 Christmas Tree.  There was a flood caused by Zach (@Action News issue #234, January 16, 2005) that nearly swept it away, and it took several from the Rose Garden to save it and carefully bring it to its new home.

It isn’t remembered if Zach did this all on his own, or if he planned it OOCly in conjunction with Morticon, but every tree retirement thereafter was unique and required some form of RP (sometimes elaborate and for an extended time period) to get the tree to its retirement place.

Typically, Morticon runs or coordinates the tree retirement; he has a strong desire to make it different and fun every time, with no two years the same.  He does not run every retirement, however, sometimes allowing others to run the entire thing.

As the tradition is still ongoing, look for a tree retirement every year, usually in January.  Hope to see you there!

You can visit the old trees by entering the command luge N4 E0 from anywhere on the Spindizzy.