Because the Zerda asked for it.

Christmas Wallaby – A popular holiday custom amongst Lemurs is to capture and decorate a Wallaby for Christmas.

Cork Snoofing – a minor Lemurish sport in which the nostrils are plugged with corks, and snoofed at targets or for distance.

Cretumbrousness – Cretumbrousness is a quality which is highly pleasing to Lemurs. Its nature is intuitively obvious to Lemurs, yet has never been defined to the satisfaction of outside observers.

Hanukkah Harmonica – The Hanukkah Harmonica is traditionally given to the youngest Lemur in the family each Hanukkah. At first, all of the holes but one are plugged with corks, so that only one note can be played. With each passing day, another hole is uncovered. Old Hanukkah Harmonicas are considered quite collectible, as most become lost or broken before the eight days are up.

Horses – Horses are warm, and comfortable to stand on. (Some lemurs think centaurs are horses. This of course is wrong – Argon)

Lemur Essence – The substance that keeps Lemurs from reverting to Dinosaurs. Zinc is necessary for the existence of Lemur Essence. Some time back Morticon depleted Suri’s Lemur Essence, and she was a Dinosaur for a few weeks.

Micro-Lemurs – Lemurs do not have brains. Instead they have control rooms staffed by Micro-Lemurs. The Micro-Lemurs, in turn, have even smaller Lemurs controlling them, in an infinite recursion. Suri is an example of the currently largest size of Lemur. In the future, during the Second Cretumbrous Age, there are expected to be Macro-Lemurs, whose control rooms will be staffed by Lemurs Suri’s size.

Oy Cretumbro! – An exclamation used when finding some unexpected cretumbrous thing; also the Motto of the Secret Lemur Civilization. When the initial paperwork for the Secret Lemur Civilization was being filled out, several of the Lemurs cheerfully exclaimed “Oy Cretumbro!” upon finding that they would be allowed to pick a national motto. By the time the confusion was straightened out, the blank had already been filled out in ink, so “Oy Cretumbro!” became the motto.

Prunkle – A sound made by a satisfied Lemur, often in response to a cretumbrous situation or object.

Roundness – One of the two Essential Qualities. Suri is a Round, Round Lemur. q.v. “Pointiness”.

Snoof – A questioning sound, or less often, a sound of surprise. “Snoof?” or “Snoof!” The sound is made by rapidly exhaling through the nostrils. q.v. “Cork Snoofing”

The Lemur – The most common last name among Lemurs, shared by more than 98% of the population. Suri’s full name is Suri the Lemur. Some other names are Prunkling-Smythe, Fruiteating-Jones, and Von Lemurmeier. Suri’s cousin Phoobia is named Phoobia Prunkling-Smythe.

Universal Lemur Theory – The idea that all forms of life apart from Dinosaurs and Vending Machines are a type of Lemur.

Uranium – Second most cretumbrous of the metals, often used for decorative items.

Zerda – Lemurs hold the Zerda, or Fennec Fox, in superstitious regard. Under most circumstances, it would be bad luck to refuse the request of a Zerda. Most of the exceptions to the rule involve zinc.

Zinc – Most cretumbrous of all the metals. A complete explanation of the relationship between zinc, roundness and pointiness, the Cretumbrous Age, Dinosaurs and the Universal Lemur Theory is outside the scope of this document.

Zoofle – A series of fast, quiet zoofs that run together. A noncommital sound.

Holiday Customs of the Lemur

The Hannukah Harmonica  – This is an eight note harmonica. At the beginning of Hannukah, there are little corks placed in seven of the eight holes, so that only one note can be played. Each day, another cork is removed, and the harmonica gains another note. The youngest Lemur of the household traditionally uses the Hannukah Harmonica to serenade the family from sundown until bedtime throughout Hannukah. It is rare for a Hannukah Harmonica to survive for the entire eight days, as most become lost or broken.

Thankstaking Day – The last Wednesday in November. On Thankstaking Day, you’re allowed to keep anything that you can pick up and thank the owner for before he objects. You have to give it all back on Monday, though.

The Christmas Wallaby – In Madagascar, it’s traditional to decorate a Wallaby for Christmas. After an exciting chase and capture, the lucky Wallaby is securely wrappe 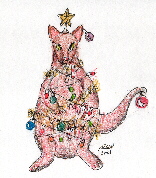 d in electric lights, and decorated with tinsel and ornaments. A suction-cup star is ploompfed onto his head, and his pouch is then filled with water so he won’t dry out.

Carolus Magnussing – A group of Lemurs costume themselves as Charlemagne and his court, and go from door to door singing songs. One Lemur takes the role of Roland, and blows a vuvuzela as loudly as possible while everyone else tries to sing over him. It’s traditional to present the Carolus Magnussers with small gifts of food or money to persuade them to go somewhere else.

Painyata! – A violent party game, often played at drunken holiday parties. Everyone puts on a blindfold, and gets a bag of candy and a stick…

The Lemur year is broken into nine seasons, eight of which occur every year, and one (The Lemur Annoying Season) only in leap years. Additionally, two of these season (the Octoberish Season, and the Post-Octoberish Season) are further divided into half-seasons.

The Anti-Decemberish Season May 31 – June 30

By Suri the Lemur