Letters of Einstein and Rosen – old

I wish to write to you specifically in this letter to see if I can receive assistance for a very unusual set of dreams I started having approximately seven days ago. I am unaware of what my family has spoken to you about me in the last two and a half years since my exile, so in succeeding letters I will try to get you up to speed.

Firstly for the past week, I have been subjected to the most unusual and rich dreams of my entire life. Dreams as you know, Dr. Egan are normally sensory deprived. Tactical for example is rare, while of course olfactory is quite common. Not these dreams however, for I have found all senses are fully utilized and I remember them clearly. I can feel the softness of the fur of ones I interact with. I can smell the wood smoke, hear the slight heart rate of the other doe in a quiet room, and blue and ultraviolet is intensely vivid as I go out and look up at the stars, especially ones like α Orionis.

Another very odd aspect of these dreams, is that I don’t feel the presence of my previous alters. “Johnny”, “Ruby Rage”, “Recorder” or even “Feral.” These alters as you are aware of, were merely the manifestation of the mental injuries I was receiving while upon Tendax 5 as a fawn. I find too, that there is no parallel between the Dissociative Identity Disorder which gave “birth” to those alters, and this most unusual dream. There is no memory loss at all; the closest I can come up with is. It is though my entire mind has been transported into the body of another.

Now, the reason for my exile here: As you may know, there was an uncontrolled Einstein-Rosen Bridge (or ERB) incident in the Cythereain Sol subway area of 29 Oct 3011. I was attempting a rescue mission, and a resulting wild-worm (the public name of said ERBs) captured my humvee and deposited me nearly two light years from a previously unknown spindizzy.

Judging by my telescopic probes of the star this spindizzy orbits, it appears to be α Piscis Austrini. But my own memories was confirmed when I received my first library database. There is no planets or any sort of artificial structure in orbit around Fomalhaut. I assume you have now checked the Wikipedia’s to confirm what I have also read; that is our first warp probes was launched in the late twenty-first century to this star, and nothing has ever appeared in the intervening years. But my humvee’s AI “Crazyhorse” detected this spindizzy with his limited sensors from two light years away.

Of equal or perhaps greater significance, the amount, and variety of lifeforms on this spindizzy is astonishing. There is more different plentycael
species than Earth and the Sol system ever had. Even counting the extinct species.
1. Mythological species; Westly, is apparently a true Sanguinarian, and I have even met orthodox centaurs; One is a stallion by the name of Kefan.
1. Several, non Ka’rassian metamorphs.
2. My first day (subjectively), I met a Plentycael which I mistook as a vulpeculan. I even thought for a moment that it was you, Dr. Egan. But Kelketek assured me he has been living here for many years.
3. Only a few weeks in my exile, I met a male plentycael. At first I thought he was Anikawi. But as I learned slowly over time, Jukka is not Anikawi but cervianian. I have attached his holo.  We have grown quite close in my time here, and he accepted my invitation to be a lovemate. 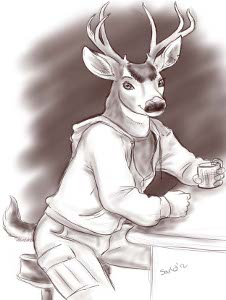 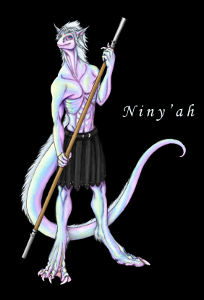 Finally in the last six months, I have met yet another plentycael; one of a species I have never seen or even read in “The Dodd catalog of known
interstellar species”. If you can, please send a copy of the holo and my observations to the Grey’s representative to see if they are aware of her species and has been cataloged. Her holo is attached as well.

Niny’ah, or better known to us as Niny is an extrasolar species called a “Seirmerine” which I met a year after I arrived. She was within a clothing shop I frequent and we struck up a conversation.

She has said, and confirmed by her physiology that her species evolved near water as a food source. She confirmed it is similar to the our otters that she has seen in the holovids, whereby they are divers, and gathers of aquatic substance. There is very little fur upon her entire body, except for a mane of pure white upon her head. Bipedal, on wide webbed feet and hands. She is also equipped with a tail nearly as long as she is tall and which is partly prehensile, and I’ve seen her use it like a third hand. Her eyes are large, and she has said they can see most strongly in the green spectrum which penetrates the deepest in water. I have noticed too her night vision is probably as strong as mine suggesting a tapetum lucidum.  But even aquatic based she has no problems being able to stay outside of water for long periods.

Personality wise, I have met few who are as intelligent and passionate as her which I find quite refreshing. She is quite a musician which I found interesting when she started playing a type of drum quite similar to Earth based ones. Along with my flute we at times entertain ones at various establishments spontaneously. She is a dancer of surprising skill, exhibiting a fluid and sensual grace as well.  She has confided in me that her species just developed FTL drive. So I’m judging her planet’s level of technology to be around our late twenty-first  to early twenty-second century.

Hence with all this new evidence, I have come to the conclusion that the uncontrolled Einstein-Rosen Bridge that brought me here is not only a bridge from point A to point B in our universe. It appears to have transported me either though time and this is a different timeline, or else I’m in a parallel universe. The star we now orbit and Sol appears to be the correct A3 V, and G2 V respectively, and there is a noticeable degree of particulates in Fomalhaut space. (I will go into detail more fully in other letters about the Fomalhaut space.)  But of course a few thousand years could pass for either star, and I would be unable to notice any difference. I am grateful at least that it deposited me close enough to a habitable structure, and did not collapse completely.

With that, let me describe the dreams I mentioned.

I have meditated for several days to pull out details from the dreams, which I have now outlined, and bullet(ed) what I ascertained.

For this first journal, I have started with a broad outline of what has transpired with these dreams, then in subsequent journals I will go into details.

1. The milieu: So far from what I have been able to ascertain. The entire setting is a very primitive, non-technological ambiance. You could compare it to a human native American environment in pre-columbian times, based in the 16th or so century. My home is a cloth based tipi, and it appears I have a strong skill at archery.
2. The most astonishing part of these dreams. Is although I never studied or experienced such a culture it appears, I have knowledge and skills required for such a lifestyle.
3. Species wise, I am still Anikawi. I can see I have the same fur coloration, tail, hooves, and puddles of water show I also have the same skull structure. But my clothing is a slight variation of what I understand human female native Americans wore and it is trade cloth, not animal skins. (Again, I will go into details in futher letters.)
4. I apparently have a sister and it is not Weeko. This new “sister” is named Abequa, she is several years older than I and is leucisticly colored. I can recall only one other leucistic Anikawi and he was dead at least fifty years before my birth.
5. Following this my “sister” and I speak pure Nameria, and there’s a noticeable accent. As you know I usually speak Nameria with ones of my own species, or in special situations such as ceremonies. However Abequa appears to know nothing of English.
6. Lastly, although I attempted to grasp other images, I only have a feeling of meeting other Plentycaels, and humans.

As I said in the start, the richness of the dream is astonishing. I can smell the wood smoke of the fire burning in the fire pit; the crackle and pop of green wood; Abequa’s breathing and heart rate; the warmth and contrast of temperature differences. Especially now, for it appears this planet – for lack of a better term – is experiencing a winter tilt or a winter phase of it’s orbit.

For future journals, I have been studying and downlearning more about dreams and how to gain more information about them. At present the medical facilities on this spindizzy, as advanced as they are, cannot record memory engrams so I cannot record dreams. Perhaps if I was to have the blueprints of a mind recorder I could attempt to construct one here.

In closing this first journal, Dr. Egan, I hope that you can make some sense of this. I do not feel any sense of apprehension in the dreams, merely confusion. Is this a normal dream? Is there possibly something else going on? I await your input.

The “Letters of Einstein & Rosen” are a set of journalistic stories dealing with an uplifted deer, and her trails and tribulations as she tries to make a life from her forced exile upon a “spindizzy.” It combines the author’s real-life entries, the character’s encounters within SpinDizzy muck (www.spindizzy.com), and Winter’s Oasis muck (www.wintersoasis.com) but portrayed as a dream she is having. All written within an in-character, fictionalized journal stories.

The idea was considered for about a year before the first entry as a way to write continually and to improve my writing. It wasn’t till I started reading AltarSkunks intelligent, and remarkable BDH series (http://www.furaffinity.net/user/altarskunk/) t hat I decided to try this myself.

All people who appear in this have given permissions to appear, and authorize what their character does, and says BEFORE the entry is posted. (This may delay the next installment, but that is the policy of the author, and it is strictly enforced.) Their entries also are covered by the CC license below.

This work is licensed under a Creative Commons Attribution-NonCommercial-NoDerivs 3.0 Unported License.