Zadfrack and the Three Bears

A traditional Lemur tale, presented for Austin Dern, and Kern the Tern, and others who would of Lemur culture learn.

Once upon a time, in far-off Madagascar, there lived a colony of Lemurs. They owned a paper mache mine, and made their living by digging paper mache and selling it to the Terns. They 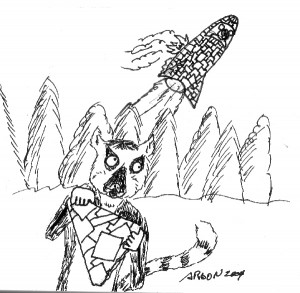 were thrifty Lemurs, and used what extra money they made to finance a moon rocket which they were building. As it rains a lot in Madagascar, and as they had chiefly paper mache from which to build their rocket, there were numerous setbacks. Still they perservered, and each time the rocket would rise afresh from the sodden mess.

One day the Chief Lemur sent Zadfrack Lemur off to the beach with a load of paper mache to sell to the Terns. Zadfrack hadn’t gotten far before he met a Garter Snake pedalling a curious little wagon hung all around with assorted knickknacks.

“Hi Monkeyboy!” said the Snake. “What’s that you’ve got there?”

Zadfrack explained about the paper mache and the Terns, and the problems that they were having building their moon rocket.

“I have just the thing!” said the Snake, placing three ball-bearings on her counter.

Zadfrack went “oooOOOooo…”, impressed by the round and shiney ball-bearings.

“These aren’t just any ball-bearings”, continued the Snake. “These are magic ball-bearings, and the Bears that hatch from them will know the secret of making waterproof paper mache.”

Zadfrack quickly made the trade, and kerschlundled away home with the magic ball-bearings. When he explained what he had done, the other Lemurs were all deeply impressed, and sat around for quite some time prunkling and whirring cheerfully as they admired the shiney spheres. At last they made some paper mache nests in their garden, and put the ball-bearings in them to hatch. Then they went to bed.

When they awoke the next day, they found that the ball-bearings had indeed hatched, but the Bears were nowhere to be seen. All that could be found was a trail of tiny Bear tracks, leading away into the forest. The Lemurs wasted little time in howling over their misfortune, but instead went out to look for their Bears. The Bears were nowhere to be found, however, and after some time the Lemurs were forced to admit defeat. They returned to their paper mache mine, crindling woefully, having been so close to having the secret of the wonderful waterproof paper mache, only to have it slip through their paws.

Time passed, and reports began to be heard of a family of Bears building a moon rocket of their own on the far side of the forest, a wonderful rocket which didn’t collapse into a shapeless mess every time it rained. The Lemurs sent out emissaries to ask the secret of the waterproof paper mache from the Bears (for indeed, it was the very same Bears) but the Bears rebuffed them, and would not share what they knew.

The Lemurs talked the situation over, and decided that a spy would have to be sent to learn the secret of waterproof paper mache. The Chief Lemur picked Zadfrack, and bright and early the next morning, he kerschlundled off through the woods to where the Bears were building their rocket.

After a while, he came to a clearing in the forest, with a big paper mache moon rocket standing in the middle of it. Zadfrack looked things over carefully, but the Bears were nowhere to be seen. Zadfrack decided that he would have a look around.

Next Zadfrack investigated the galley, where he found three loaves of bread. The big loaf was hard as a brick, and Zadfrack put it back. Next he tried the medium loaf, but it was all soft and chewy, without any real texture. He passed that one up too. Then he tried the tiny little loaf, and it was perfect – hard and crunchy outside, and soft and chewy inside. He tucked it under his arm to eat later, and went away prunkling cheerfully to explore the rest of the spaceship.

Next he came to the control room, where he found three acceleration couches. The big couch was too hard, and the medium couch too soft, but the little couch was just right, and Zadfrack sat down to eat his loaf of bread. He’d just taken his first bite, when from a hatchway overhead he heard,

“Tibia, Fibula, Scapula, Femur!
I hear bread being eaten by a Lemur!
Be it French or merely stale,
The crunch betrays them, never fail!”

Just then the Bears appeared at the hatch above him, and began to climb down the ladder. Zadfrack fled, dragging the rocket fin behind himself. Without the missing fin, the rocket was much less stable, so that the Bears on the ladder overbalanced it, and ever so slowly it began to topple, the gyros fighting all the way.

Now the Bears went “ACK!!”. Thinking quickly, they realized that their only hope of avoiding disaster was to launch the rocket now. Back up the ladder they scrambled, with all the alacrity of panicked Bears. Quickly they strapped themselves in, and with a roar and a gush of fire, the moon rocket took off, climbing into the eastern sky.

Sadly, while the paper mache was waterproof, no-one had thought to check it for fire resistance, so that the combustion chambers burned through several miles downrange. The three Bears parachuted to safety on Diego Garcia, which to this day remains infested with Bears. As for Zadfrack, he trundled on home with his paper mache sample, but when the other Lemurs heard about the burnthrough they reconsidered their plans for building their rocket of paper mache, eventually settling on more durable zinc as a construction material. This led them to open Madagascar’s first zinc mine, and although they never did reach the moon, they still lived happily ever after.